I wrote last week about how I tend to use a Paleo based diet to help me remain within my calorie allowance for the week (whether that be calorie deficit or maintenance).  Restricting certain foods is not for everyone – another way some people control their calorie intake is Intermittent Fasting (IM Fasting).

IM Fasting in a nut shell is only eating during an 8 hour window each day (e.g. 10 am-6 pm / 12-8 pm) and fasting the rest of the time (consuming only water and perhaps black coffee).

Now this naturally restricts your calorie intake each day because it’s hard to eat THAT many calories in only 8 hours.  The plus side is you can eat relatively freely in terms of what you eat knowing that the time window will assist in preventing over eating.

I tried it for a while and liked some things about it but ultimately struggled to stick to it- largely because I’m very active across two jobs most days of the week.  This being said I do know some people who regularly use this as a tool.

For me the Pro’s were:

Ultimately the Con’s outweighed this for me though:

As I concluded last week.  The fundamental characteristic of all fat loss methods is creating a calorie deficit.  IM Fasting is another option which will assist in eating less than you burn if used correctly, although probably only genuinely suits a small proportion of people.

Because I have zero idea!

If you have written a blog about any of these please point me to it!

The week before last I hit a bit of a slump – my training and nutrition has slipped and I was eating far too many calories and not nearly enough fresh food. Hello sugar!

When this happens I find the easiest way for me to reset is to have a week of no ‘rules’ but decent food and for me the simplest way to do this is order in some meal prep.

I’d love to be able to afford to buy meal prep every week but it’s a bit beyond my budget however for a week to take away stress, add variety without having the stress of cooking it’s a really good idea.

I used PerfectPrep. They deliver nationally (UK) and I got 14 meals for £72. They were delivered Tuesday and lasted me until the end of Sunday (on Wednesday and Thursday I had 3 meals). 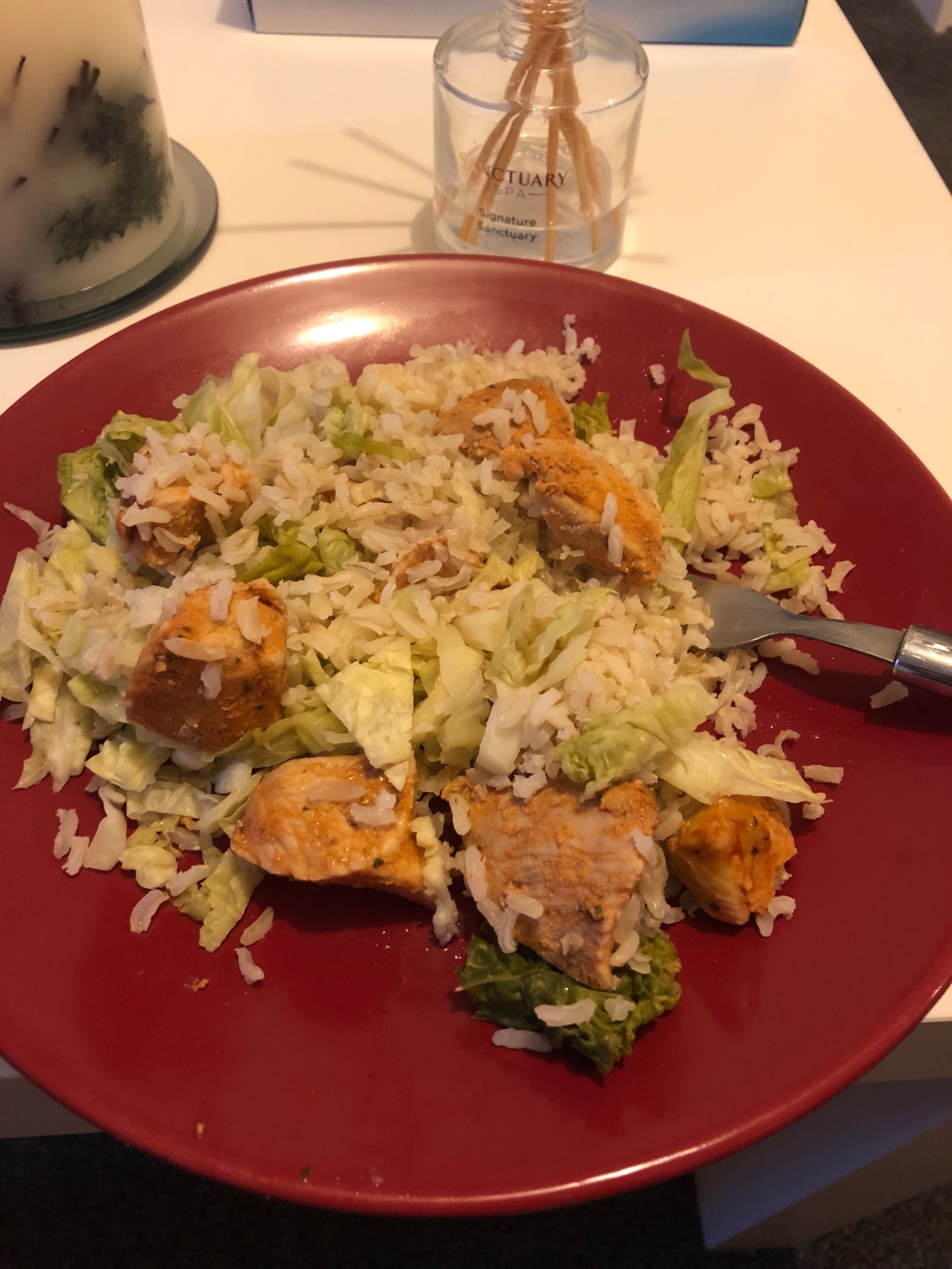 I added in my own breakfasts and snacks and by the end of the week with zero effort or proper planning I’d hit my calorie target and my protein targets for the week. I felt better and this week have eased back into my normal eating habits feeling like my mind has re-see itself.

Have a system that allows you to eat well but accept that sometimes you will need to mix things up for a bit and having some back up plans, like I had here, allows you to re-set without just saying sod it and eating everything and anything you can lay your hands on. 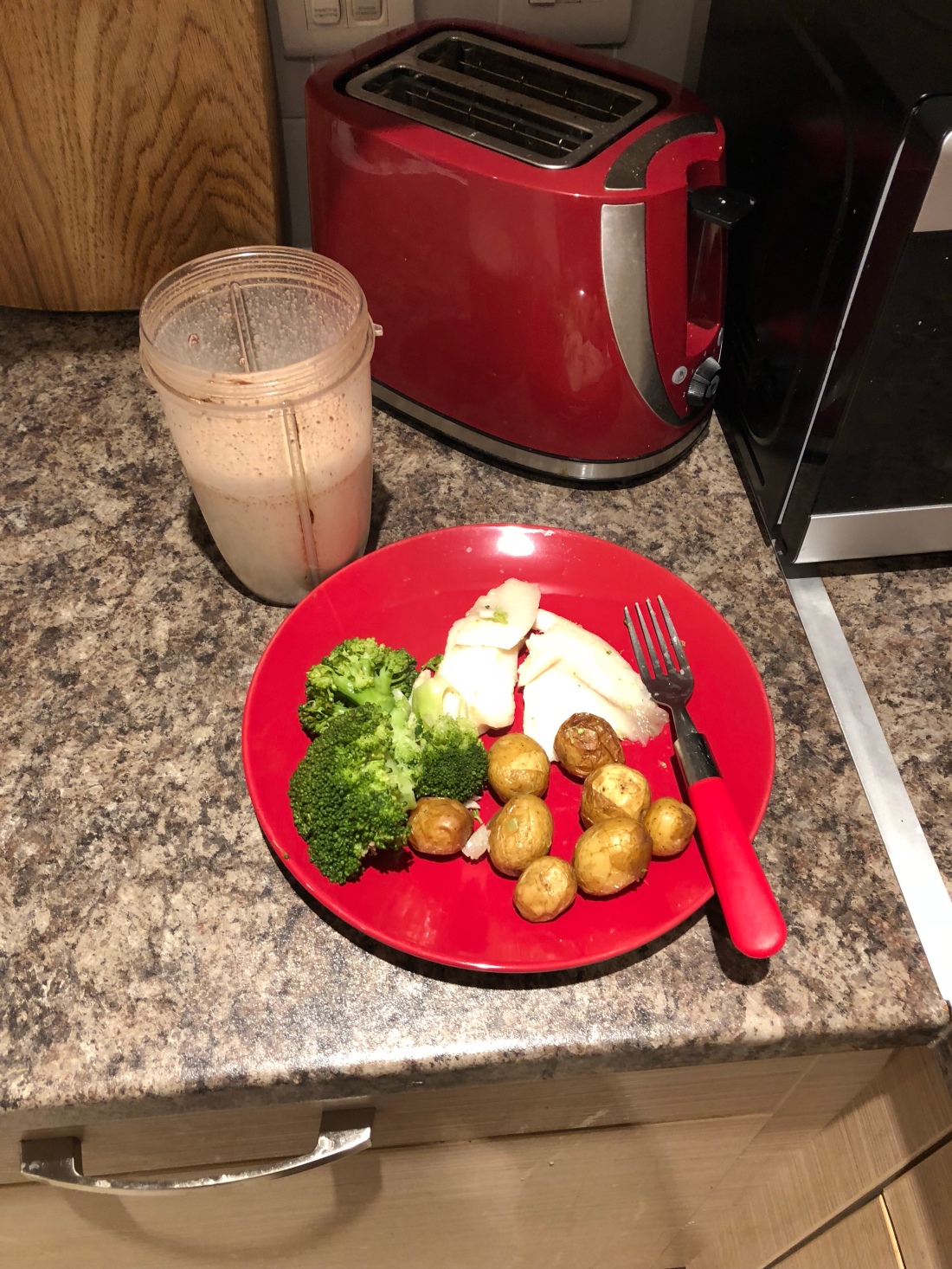 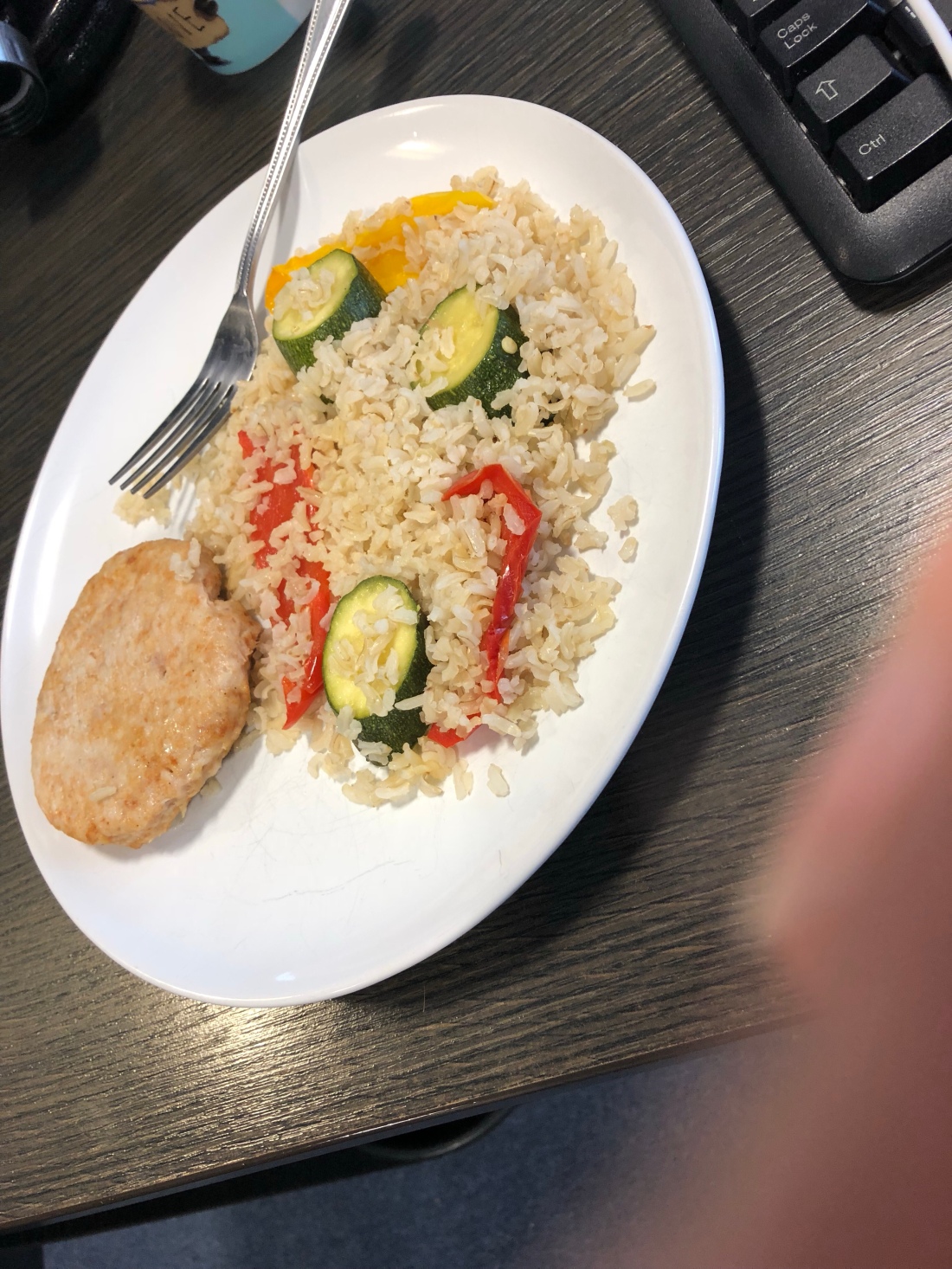 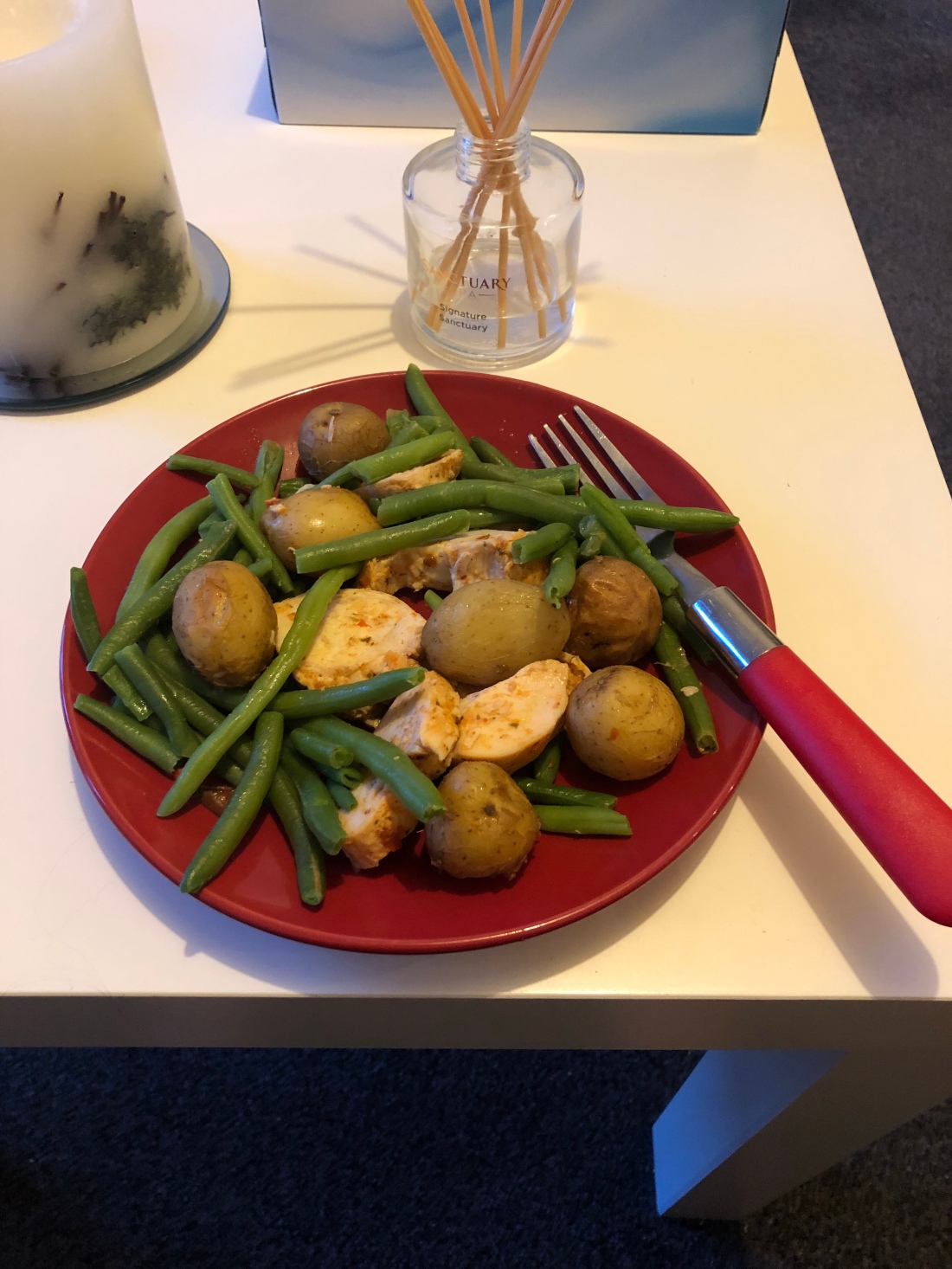 Last week I had a bit of a rubbish week nutrition wise – and I know to be honest it was largely down to my breakfasts.

Some people say they can’t eat breakfast- I am the total opposite- I need a good breakfast to set me up for the day.

Last week I just found myself not enjoying my normal breakfasts – I just didn’t fancy them and I found that this dissatisfaction towards my breakfast prep quickly spread to all my other meals and I soon found myself snubbing my home made meal prep and opting for carbs upon carbs, sugar and generally processed, stodgy not particularly beneficial foods.

I decided that this week I needed a week away from Paleo.  I still think overall it’s the system that works best for me but I also know I occasionally get myself into a tizz and whilst I’m there restriction doesn’t really work.

So I ordered some meal prep for my main meals for this week (blog to follow later this week) and decided that for breakfast I would eat what I fancied.

Now I walk past McDonalds to get to work – and I teach first thing so by the time I do walk past I’m normally pretty hungry.  This week I’ve just gone in and ordered what I fancied.  This sounds pretty unhealthy, and yes they were high calorie meals, but actually, when you look at it, as breakfasts go they aren’t as bad as I first thought.

Now I got these numbers from MyFitnessPal so I don’t claim they are 100% accurate. These are the type of things we traditionally eat in the morning.  They are all quite low in calories and protein and high in carbs.  For most people a 30g bowl of cornflakes is probably unrealistic – have you ever measured out a bowl of cereal- a suggested serving is massively disappointing!  My issues with these breakfasts is that, whilst they are low in calories they don’t provide me with much protein (and I try to eat 160g a day) nor will they fill me up – which means that any calories saved at breakfast are likely to be made up in snacking mid-morning when I get hungry.  Mentally they also don’t particularly satisfy me so again I’m much more likely to snack –an on stuff I shouldn’t snack on at that.

In comparison, this is what I had at McDonalds the last two mornings:

These breakfasts are about 70% higher calorie wise.  For some this would be extremely detrimental to their daily calorie intake granted.  However I burn 3,000 to 5,000 calories a day so I actually do need to eat a lot of calories each day to avoid a detrimentally low deficit. A thousand calorie breakfast therefore isn’t the worst things as my subsequent meals are unlikely to reach that level.  In addition these meals filled me up AND satisfied me.  I felt like I had had an enjoyable and filling breakfast and didn’t feel the need to start snacking an hour later.  The protein content of the meals was also high, hitting around 25% of my daily aim.

For my requirements then these higher calorie higher protein meals actually work better for me than the more traditional ideas of a breakfast.  And because I’ve felt satisfied and enjoyed my breakfast I’ve found it easier to stay on track the rest of the day.

Now normally when I’m following a Paleo style diet I have this:

My Go To Paleo breakfast –

This has the benefits of being high in protein and low in calories and fat whilst also being filling.  I know it’s better for me than a McDonalds breakfast.  Realistically I know for my long term health I need to eat this more often than I have a McDonalds breakfast.  Yet when I’m really not feeling this of a morning then rather than letting my whole day fall away because mentally I’m not going to be satisfied, because I know that today I’m going to throw a mental tantrum, the odd McDonalds breakfast won’t hurt.

In conclusion – as a society we tend to group things as good or bad, healthy or unhealthy.  However whether a food will work well in your diet or not actually depends on so many factors- what you eat the rest of the time, what you burn, how it makes you feel etc.  Rather than following accepted ideas about different meals we should look at our own situation on any given day, week or month and pick options that benefit us best in that moment – even if that might sometimes seem an unusual choice.

I’m not a trained nutritionist nor am I suggesting that you should have McDonalds for breakfast every single day – just that sometimes we need to look outside the boxes we are currently in and objectively review our options because no foods are simply good or bad – it’s never that black and white.